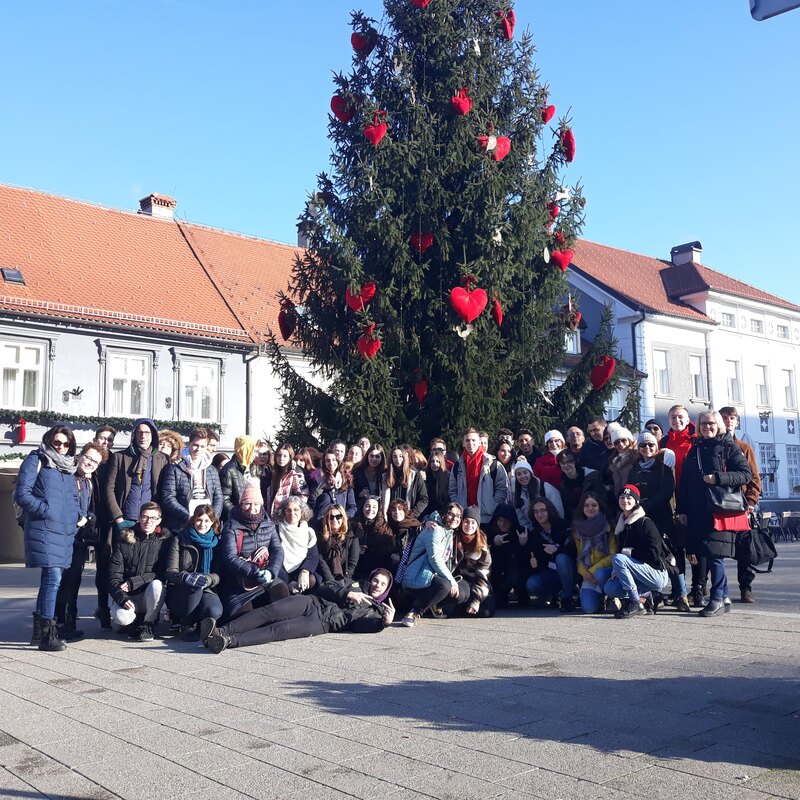 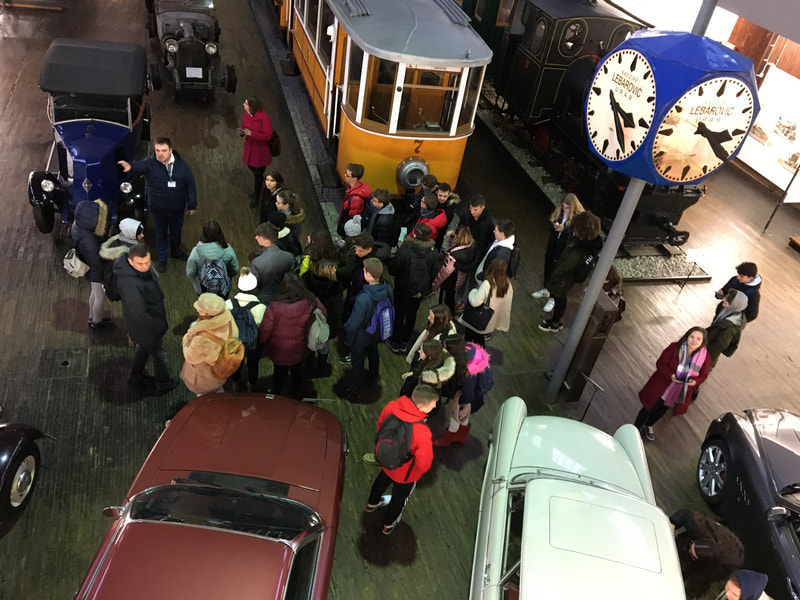 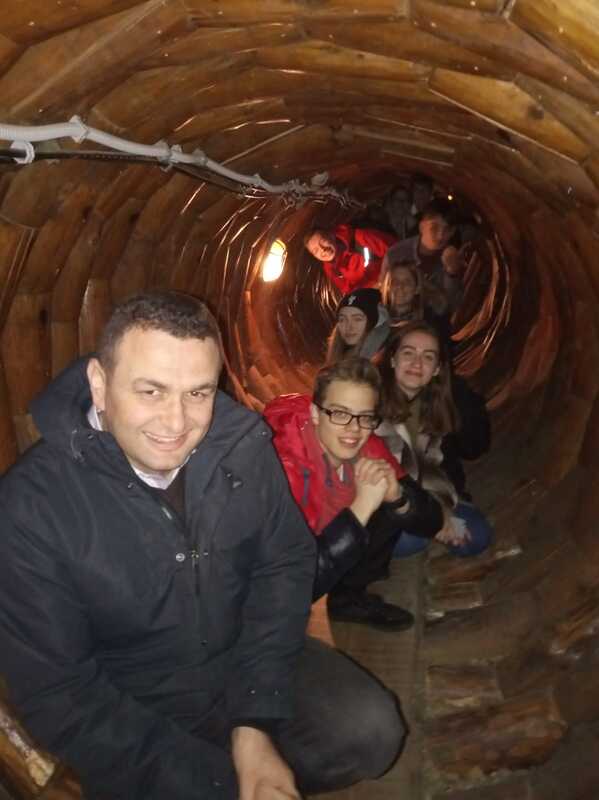 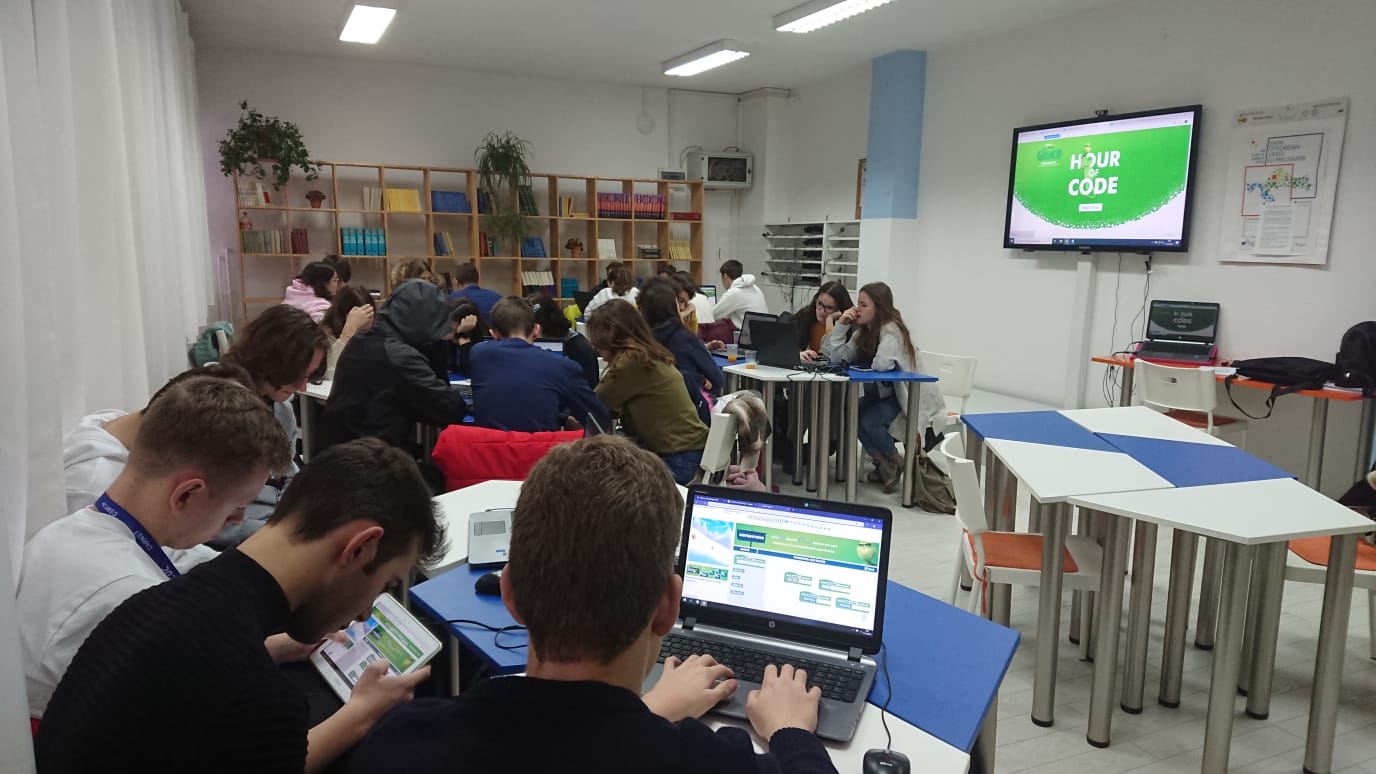 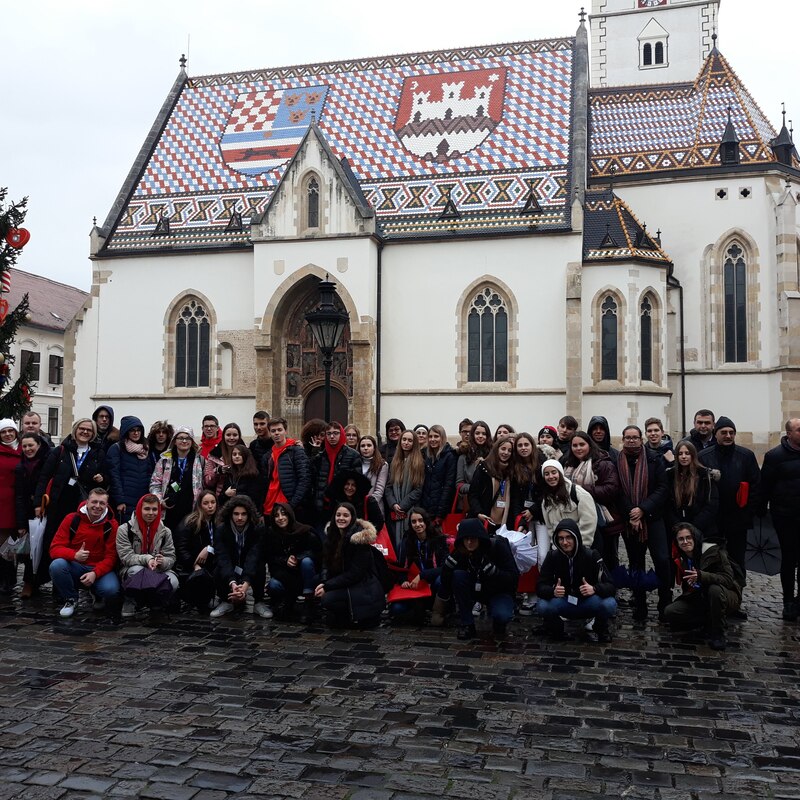 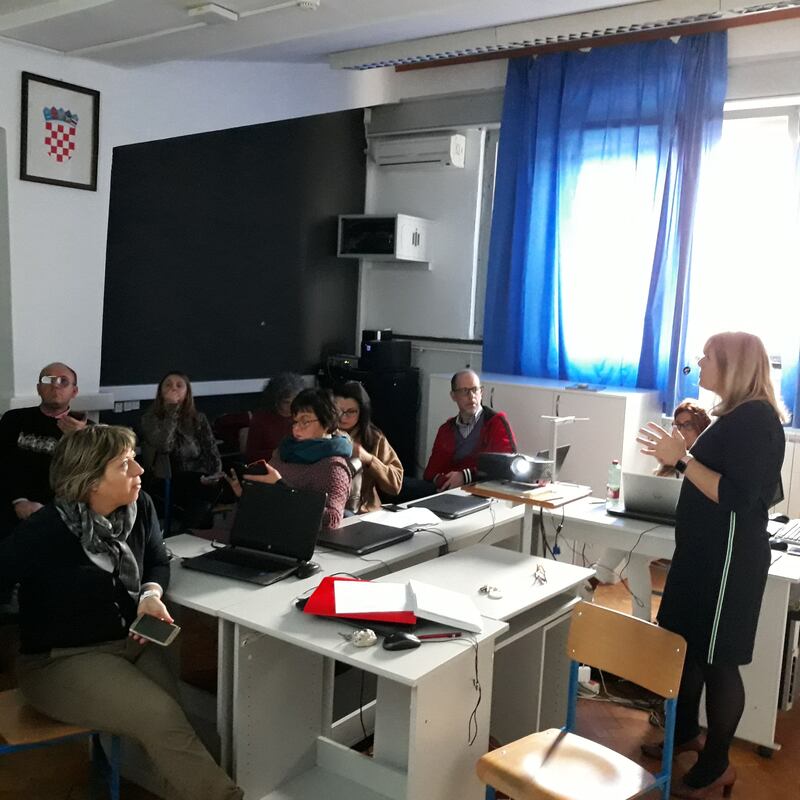 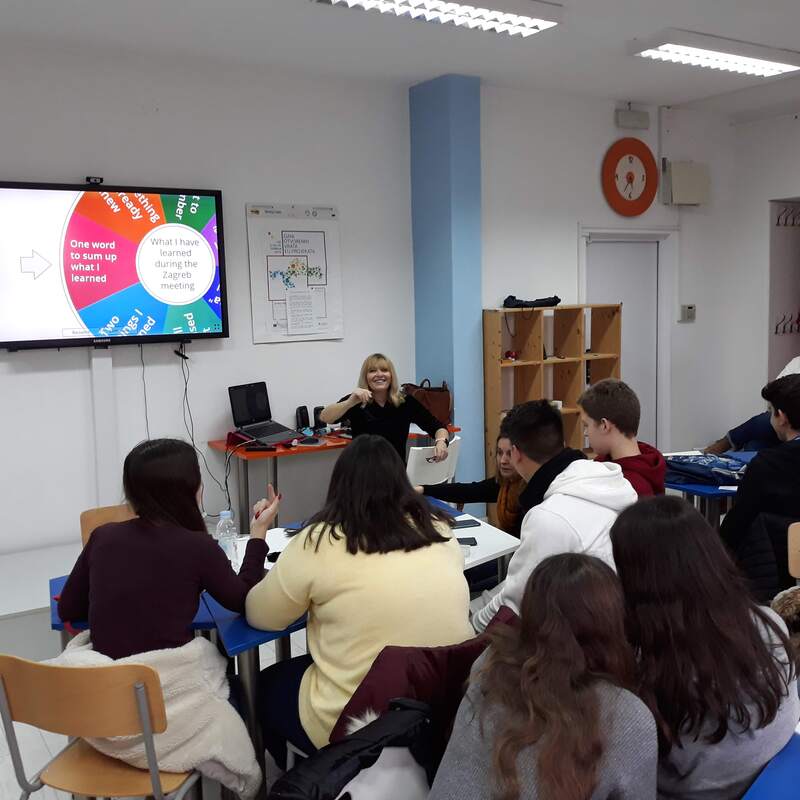 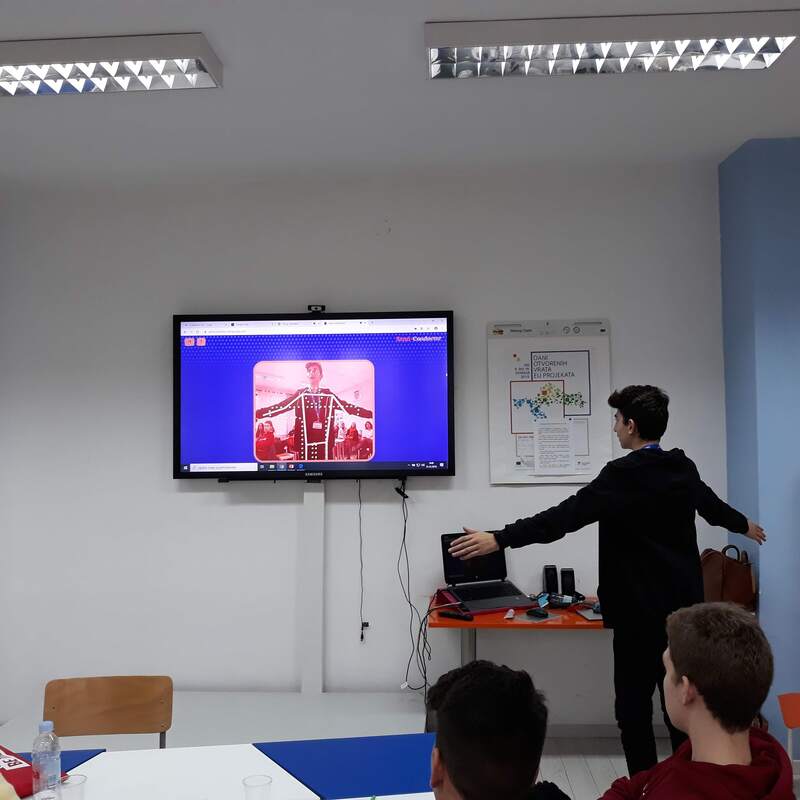 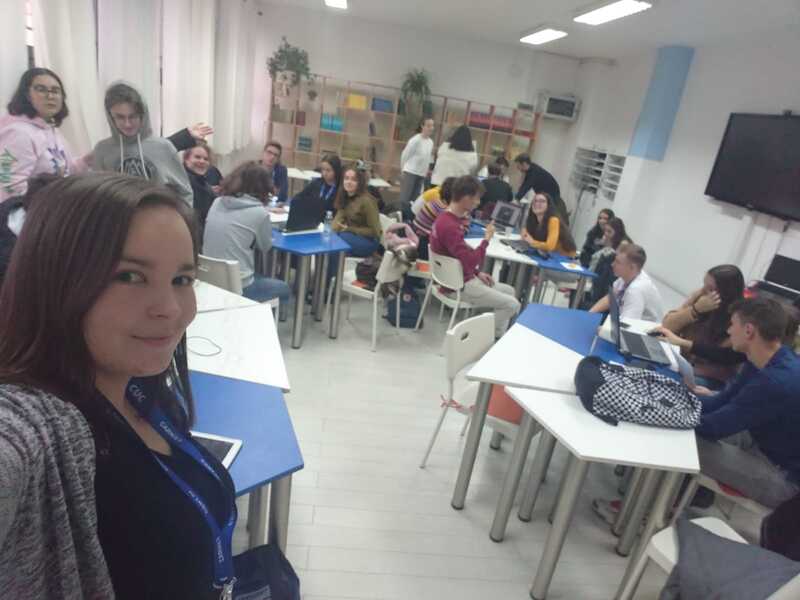 The third exchange of students involved in the Erasmus + project LOAD – Life of a Digi took part in IX. gimnazija in Zagreb, Croatia, from 9th to 13th December 2019. Altogether twelve teachers and twenty one students from all partner schools participated as well as twenty students and six teachers from the host school.
The participants followed the official programme of the meeting.
The exchange started on 9th December morning with a welcoming ceremony at the school with several speeches by the school principal, Mrs. Sonja Lušić Radošević and the Project coordinator, Mrs. Mirjana Franić. The school choir sang the Croatian national anthem and a few traditional Croatian songs. Students involved in the project welcomed guests in our city and country.
Soon after the ceremony students were taken on a short tour around school and attended classes of different subjects. Having had a break both teachers and students by tram went to a guided city tour which ended with a visit to the Museum of Illusions.
The second day after teachers had attended the workshop on Emerging technologies /Metaverse and Glide held by Arjana Blažić, students accompanied by teachers were taken to a Croatian start-up company Photomath which was founded by young IT experts and focuses its business on creating software for solving maths problems. There everybody attended a presentation.
The third day students and teachers went by bus directly to Samobor town where they took a short tour and pictures after which they continued to the town of Sveta Nedelja where they were welcomed by the town major, Mr. Dario Zurovec, the former student of IX. gimnazija. Being an IT engineer he explained how his knowledge in this field helps him to get EU funds and build the town infrastructure.
The fourth day students attended the workshop and later took a short walk to the nearby Technical Museum Nikola Tesla. In the Museum they saw the exibits, went to the tunnel and took part in Nikola Tesla's experiment with alternating current.
The afternoon and the evening were free and students went ice-skating on Christmas Market in the city center.
All four days in the mornings students were attending workshops held by Jelka Dorić, Maths and ICT teacher in IX. gimnazija.The first workshop was the introduction to One Hour Coding, the second Metaverse and Glide Apps, the third the workshop on creating a computer game in Scratch.The resume of the previous three workshops were forming multinational teachers-students’ who tested the games made by themselves.
Last day both students and teachers attended the workshop on Artificial Intelligence held my Mrs. Arjana Blažić after which students presented what they have done in workshops during the week.
Around noon there was the official ceremony of handing out the Certificates of Attendance and taking official photos of the session closure. During the course participants developed fluency in a range of topics with subsequent feedback.
Covered areas were:
- fluency development through discussion; discussions on various topics; functional language in social communication; usage of phrasal verbs and idiomatic language; widening vocabulary range; developing complexity in grammar use; pronuntiation, stress and intonation, CLIL activities. Use of emerging technologies  to create activities for interdisciplinary learning and assessment, implement learning scenarios and gamify classroom activities. Create game-based learning materials.
Problem solving and critical thinking.
Language skills:
Language skills developed in continuous communication in English during workshops, collaborative work and various activities. Developing fluency in discussions of a range of topics, scaffolding and intense language work.
Communication skills:
Networking in international environment. Use emerging technologies to create activities for interdisciplinary learning and assessment.
Tasks completed during this meeting were:
Enhance standard educational materials with creative tools and applications; design learning scenarios with augmented reality applications; create learning applications
ICT skills:
Collaboration and co-creation of learning materials; safe and responsible use of ICT; computational approach and coding.